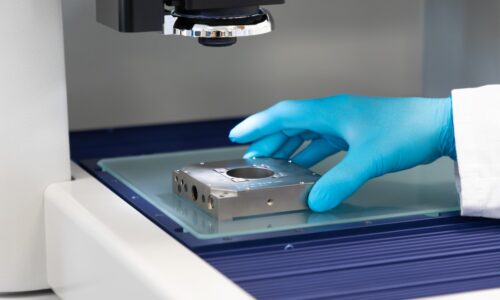 An R&D collaboration between Queensgate, a UK manufacturer of high-precision nanopositioning products, and scientists at the National Physical Laboratory (NPL), the UK’s National Metrology Institute, has yielded experimental findings that are likely to attract commercial interest from manufacturers of next-generation atomic force microscopes (AFMs) and other scanning probe microscopy (SPM) systems.

In a proof-of-concept study completed earlier this year, an amalgam of enabling technologies from Queensgate – including high-speed, piezo-driven nanopositioning stages and proprietary closed-loop velocity-control algorithms – were put through their paces by NPL researchers in a series of experiments to evaluate their potential suitability for high-speed AFM scanning applications. The results are eye-catching: reliable capture of large-area, high-quality AFM images with nanometre spatial resolution – and all achieved in a matter of minutes, rather than hours or days, at raster scan speeds ranging from 0.5 mm/s up to 4 mm/s.

Although NPL and Queensgate have worked together on several previous occasions, the latest undertaking was conducted via the Measurement for Recovery (M4R) programme. This NPL-led initiative is funded by the UK government and aims to support industry with its recovery from the economic impacts of COVID-19. “M4R provides access to cutting-edge R&D, expertise and facilities to help address analysis or measurement problems that can’t be resolved using standard technologies and techniques,” explains Edward Heaps, research scientist for dimensional metrology at NPL, who carried out the experimental work on behalf of Queensgate. “Ultimately, the aim of M4R is to help boost productivity and competitiveness in UK industry post-pandemic.”

To put the NPL study into context, it’s first necessary to recap the fundamentals of AFM. This powerful SPM modality uses an ultrasharp microfabricated tip (usually Si or Si3N4) attached to a cantilever to generate topographic images of a sample surface at very high resolution (between 1–20 nm depending on the sharpness of the tip). Deflection of the cantilever – a result of atomic-scale forces acting between the probe tip and sample – provides the basis for sample imaging and nanometrology as the tip is scanned across, and in close proximity to, the surface. In the same way, AFM is also able to map a range of mechanical surface parameters (e.g. stiffness, friction and adhesion) as well as chemical, electrical and magnetic properties on the nanoscale.

Notwithstanding the upsides, there are non-trivial shortcomings associated with AFM and other SPM techniques. Slow measurement speed, for example, means low sample throughput and troublesome temperature-induced measurement drift because of prolonged scan times (in some cases running to many hours or days if a large area is to be imaged at high resolution). “Traditional experience with high-speed AFM says that there’s a trade-off between the scan speed and the range [scan area],” explains Heaps. “For the research user, the benefits of extended range and increased scan speed will be seen in measurement throughput. That ultimately translates into enhanced productivity and more published research papers.” The same calculus applies to industrial R&D users who may be using AFM for the quality control and imaging of semiconductor ICs, quantum nanodevices or advanced optical components.

For Queensgate’s engineering team, the NPL collaboration provided an opportunity to road-test a portfolio of technologies for closed-loop velocity control that, they believe, will address the systems-level compromises traditionally associated with high-speed AFM scanning. “We had already deployed closed-loop velocity control to do fast, accurate linear ramps for motion control,” explains Graham Bartlett, lead software engineer at Queensgate. “The M4R project allowed us to evaluate this capability for AFM scanning applications, knowing that image quality links directly to how accurate our velocity control is at maintaining dead straight, linear motion with constant speed.”

By extension, image quality also provides a visual indicator of how fast the AFM stage can be driven before accurate control of velocity cannot be maintained. “If you’re taking AFM measurements every few microseconds and you’re running at constant speed, you’ll get those measurements at a constant spacing and a clear image,” adds Bartlett.  “If your AFM head speed is inconsistent, your measurements won’t be evenly spaced, and you’ll end up with a skewed or distorted image.”

Speed is nothing without control

Prior to the experimental study, Heaps used Queensgate hardware to retrofit NPL’s customized metrological high-speed AFM (an instrument co-developed by the University of Bristol, UK). In terms of specifics, that meant replacing the AFM’s existing 5×5 μm XY stage with a Queensgate NPS-XY-100 stage (100×100 μm range) driven by a Queensgate NanoScan NPC-D-6330 controller (which offers closed-loop control of position and velocity). Evaluation work subsequently proceeded along several coordinates, with initial tests establishing that velocity control remained sufficiently accurate at raster rates of up to 4 mm/s – though a progressive reduction in resolution on the raster axis is also seen as scan speeds are stepped incrementally from 0.5 mm/s to 4 mm/s.

A related issue for fast AFM scanning is the extent to which rapid acceleration and deceleration at each end of a raster line excite mechanical resonances. This phenomenon, commonly known as “ringing”, is found to be amplified at the faster scan speeds – which in turn gives a somewhat smaller linear region for image acquisition. With closed-loop control and features such as notch filtering, however, the NanoScan controller can substantially reduce these effects over an open-loop control system. The controller also has built-in waveform generation capabilities, which include S-curve acceleration and deceleration profiles to further reduce such resonances.

The fine-detail of image acquisition also came under scrutiny as part of the NPL project. The combination of high speed and larger scanning area significantly simplifies the imaging process. With the original 5×5 μm piezo stage, large-area imaging with the NPL high-speed AFM requires a coarse positioner to move the nanopositioning stage to capture a series of smaller image “tiles” that are subsequently stitched together – a slow and cumbersome exercise that impacts aggregate acquisition time. By contrast, the NPL results show that the 100×100 μm piezo stage may be used on its own to capture a larger image, while the higher speed available using velocity control gives a greatly reduced timeframe. Even if a larger area needs to be captured, it will mean significantly fewer moves from the coarse positioner – another win for the NPS-XY-100 stage.

Following on from the M4R collaboration, Queensgate and its parent company Prior Scientific are looking to share the experimental findings directly with OEM partners in the SPM community and beyond. “We see real potential for our nanopositioning stages, control electronics and algorithms to deliver significant AFM improvements versus speed, throughput and image quality,” concludes Bartlett. “It’s also worth noting that those same core building blocks are well suited for other cutting-edge applications like 3D live-cell imaging using confocal microscopy.”

This article was originally published on physicsworld.com on 7 April...read more